Positioning portfolios in context of the Corona Virus (2) 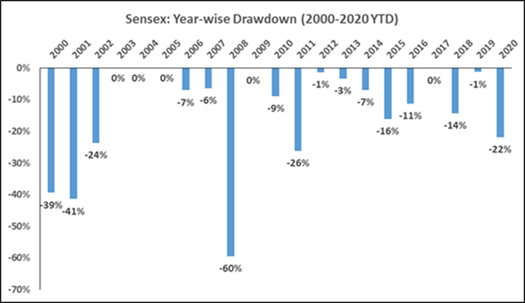 It is hard to establish a single reason for the collapse.

1.      The US markets were almost at all time high valuations.  They needed a trigger to sell off.  And the market got multiple triggers simultaneously

2.      At home,  the Corona Virus scare has coincided with the final collapse of Yes Bank .  The latter has caused some fear about safety of deposits in Private Sector Banks.

Where do we go from here?

Given low fatality rates at present,  our base case assumption is that there will be panic … but after a few months, economic activity will resume and come back to normal levels.   Quarantine creates panic but is absolutely the right thing to do to prevent spread of the virus.

So, if we look at the problem “analytically”, this is another sell off which provides a great buying opportunity.

·        Valuations are now  extremely attractive, even in Blue Chips.

·        And collapse of prices even in Utilities, which are only weakly correlated with Economic activity, suggests this is a “sell first, think later” market.

As an example, we enclose below the Valuation chart of India’s most secular execution story, HDFC Bank, updated as of close of business today.   Whenever HDFC Bank has reached valuation multiples it is trading at present, the absolute returns over the next 3 years have been ~ 90-110% (the number enclosed in a rectangle box)

However, in the short term, analysis does not matter.  If there are panicked sellers,  things can get worse before they get better.   While I feel confident that stock prices will be significantly higher in 3 years, fear can drive stock prices lower before they recover.  I don’t have a view on when we will see the bottom.   Even as I write this, the ICICI ADR is down 12%

And, as I mentioned in my last blog, all calls have probabilities associated with them.  There are risks out there which we may not fully understand.  And selling feeds on itself where every price decline brings on more sellers as it becomes self-fulfilling.

If you choose to allocate more at present,  which I would highly recommend-  please do so, only keeping the medium to long term perspective.  We have not frozen and are participating incrementally every day in accounts where we have cash and will continue to act in a disciplined manner where we see buying opportunities.